Key to the Loch: licensee interview with Sandy Fraser 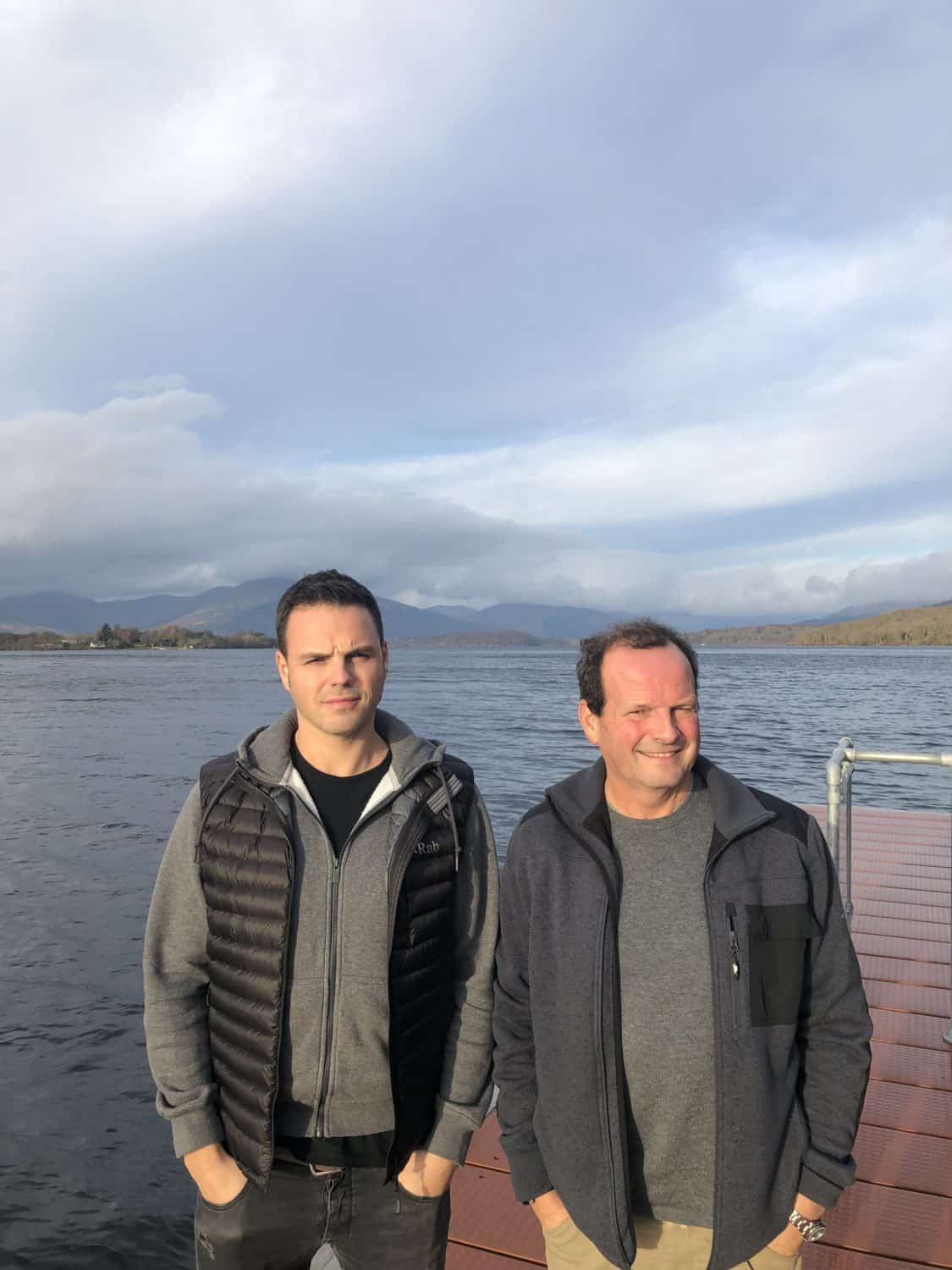 THE OAK TREE INN IN BALMAHA HAS JUST CELEBRATED ITS 21ST ANNIVERSARY. JASON CADDY CAUGHT UP WITH SANDY AND STUART FRASER, TWO OF THE CHARACTERS BEHIND THE SUCCESS OF THE BUSINESS.

Gabriel Oak is a character in Thomas Hardy’s Far From the Madding Crowd. As the name suggests, he’s the sturdy, reliable character at the centre of the story. Sandy Fraser cuts a similar figure at The Oak Tree Inn at Balmaha, on the east side of Loch Lomond, where’s he has been licensee and central to its success story for 21 years. Wife Lucy is also a big part of the business, which they built from nothing to a turnover of £3m, plus it now also employs several of his seven children and a further 100 employees across all the businesses. Yes there’s more to Sandy and Lucy Fraser than merely the Oak Tree Inn.

I caught up with Sandy and son Stuart, a partner in the business at The ‘Balmaha Experience’, as Sandy calls it. It’s not the first time I’ve interviewed Sandy: we first met seven years ago. But the business has grown considerably since then and now incorporates The Village Shop, Loch Lomond luxury ice-cream company, accommodation pods and several holiday cottages. They’ve also purchased a boat for tours as well as a proposed sail-by coffee shop (like McMonagles sail-by chippy in Clydebank should be). And if that wasn’t enough for anyone’s plate they also have planning permission for a new Oak Tree-sized building on the land just past the Oak Tree, on the right hand-side as you round the Loch, plus they a own quarry from which they mine the beautiful stone that clads many of the buildings they own.

Stuart, together with brother David, own and operate the St Mocha Coffee Shop, Loch Lomond Coffee Company, suppliers of the St Mocha Coffee Shop and a wee kiosk in Luss. And the brothers have been on the acquisition trail once more, as Sandy explained, “We want to make Balmaha the way that it was in the 50s and 60s when it was a destination, but we made a pledge at the start of the year that we’d be making no more acquisitions this year in order to focus on this. But we can’t turn down a good opportunity when it presents itself, which is what happened back in February when we acquired The Blane Valley in Strathblane. It’s a former Greene King tenanted unit and the plan is to return it into a country pub with an added coffee element, because like many pubs it is struggling. It’s very much a work-in-progress.”

He continued, “In late 2016 Stuart and David also purchased The Carbeth Inn in Carbeth. There are going to be a number of elements to the building/ site including a detached drive-through coffee shop. The main building will be renamed The Halfway House (its former name), for which we have full planning permission. Eventually this will also include accommodation and we’ll be running a pop-up by May next year with the completion of phase one set for 2020. It’s going to be like a kind of artisan Starbucks. In August Stuart and David purchased the old station buildings on Main Street Aberfoyle, and the plan is to turn this into a coffee shop with an added gift shop element. This is the gateway to the Trossachs and it was once a busy wee hub with a direct railway line from Glasgow.”

But it hasn’t all been a picnic in the last wee while. Said Sandy, “Staffing has been hellish for us. For the first time in 20 years there’s a lack of European staff and so we’ve been forced to recruit through agencies, and by signing up to agencies the staff can be getting paid up to double. We actually went to Lithuania to do presentations for students at the University of Vilnius and managed to get one of the lecturers to come here to work for us and she has been here for four years. She acts as a go-between. We’re not necessarily an academy per se, (this is something we’re looking at in the future). We do, however, provide accommodation in the pods, and that of course is one of the biggest challenges in rural hotels, the lack of accommodation, i.e. not just a pile of sheds and caravans.”

Sandy’s also seen a big shift in customer behaviour since we last spoke back in 2011. He said, “The 5pm trade in rural pubs is dead. The stricter drink driving laws have meant that most people won’t drink at all if they do go out. But in the main it’s more cultural I suppose– gone are the days when punters would go out for a couple and then go back for tea at about 7pm. A by-product of this is the closure of rural pubs. Just looking around our vicinity you can see evidence of this. One pub has closed in Buchlyvie and the last one is currently on the market, Croftamie’s only pub closed 18 months ago and had been on the market for over a year. The Black Bull in Killearn is also shut. “But we aren’t wasting time trying to endlessly figure out why customers aren’t behaving in the same way. We are focussing on new ways of operating, because if we don’t change we won’t be here. We do think that coffee shops are the pubs of the future.”

And Stuart and Sandy are also adding their voices to the growing chorus of licensees that are becoming more vocal about how grossly unfair the rates system is. Said Sandy, “Rates are absolutely crippling and this is one of the most worrying parts of our operation because we have an element of control over the other business challenges. But not this. They are penalising success, which is the same as killing the goose that lays the golden egg.” Stuart thinks that there should be more of a united front among people in the trade when it comes to fighting such iniquities. He said, “There’s strength in numbers and we feel that the hospitality industry should have one single body to fight for this type of thing. Margins are so very tight for everybody right now and we absolutely need a champion in our corner.”

He continued, “What is happening now is very, very worrying. Paying higher wages means a poorer quality product, which is why we’re trying to simplify things by doing it all on site by building a centralised kitchen, and recognising and doing something about the skills shortage we’re facing. Us being up at 25% on a wages bill is a ticking time-bomb – what next?  £20 for burger and chips?”

They’ve also had to shelve a few projects for the time being. Said Sandy, “We bottled our own Balmaha whisky. We do have plans for a brewery but mothballed it because we became a victim of our own success. It was borne out of necessity, in the early stages of the micro-brewery and craft beer boom in 2011. But since then, the Fallen Brewery and Loch Lomond have come to prominence, both of which we use. When we applied for planning permission, which we got, we originally put in for a one-barrel plant where we should have put in a ten-barrel plant.”

He continued, “The first run for the whisky was 300 bottles. I made the contacts with the master distillers through my electrician business. We worked on design and concept and outsourced the bottling. We’re currently waiting to rebottle because we have sold out.” And they’re also looking to adapting to new and emerging trends at their core business, The Oak Tree Inn. Said Stuart, “We’re looking at turning the menu 50% vegan over the next two years and, once finished, the centralised kitchen will serve the entire business – restaurant/retail/coffee shop – so that we have consistency across the business, which can be incredibly hard to achieve, like when creative differences with chefs crop up.”

But I’m sure Sandy et al will prevail because this man and his family are so very determined and never let setbacks or a lack of support deter them, like the lack of parking provision on the east side of the Loch for instance. Explained Sandy, “The powers that be seem happy for it to continue to be marketed as the ‘quiet side of the Loch’. For example, our own car park hasn’t been added to at all in parallel with the growth of our business. That’s why we have built a new pontoon to attract new visitors via the water.” In fact, it strikes me that the greater the resistance they come up against, the greater the Frasers’ business drive, so look out for interview number three in the next few years for the next update, when the Oak Tree Inn celebrates another milestone