INTERVIEW: TOP OF THE POP-UPS 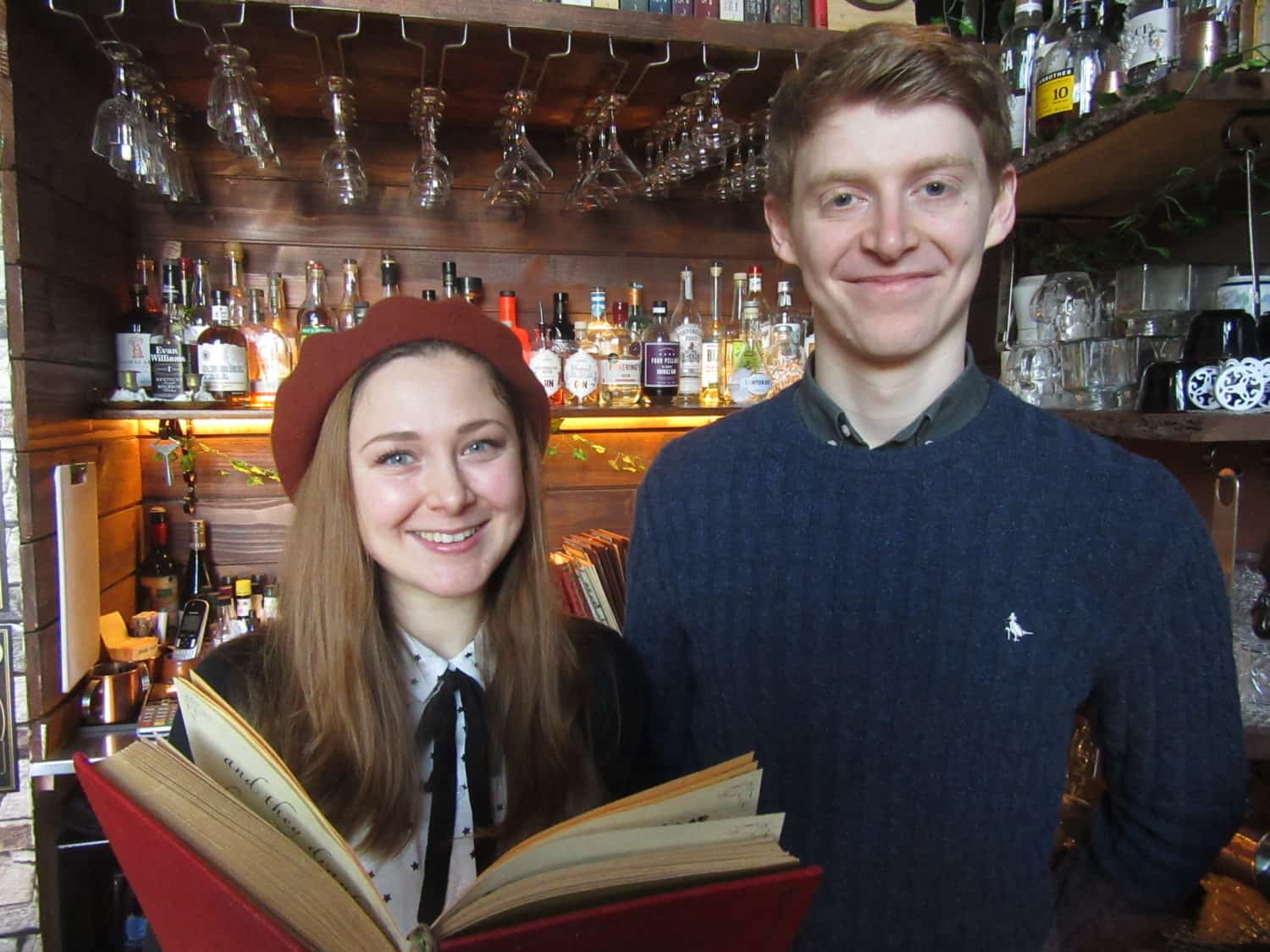 Game of Thrones super-fans Linden Wilkinson and Rachael Carpenter, aka Edinburgh’s Pop-Up Geeks’, didn’t let the grass grow when it came to turning their shared obsession into a corker of a business idea, organising a wine tasting in its honour in the summer of 2016 in Norwich. Fast forward roughly three years and this twenty-something couple, also in a relationship, now run their own permanent eponymous compact pop-up beneath one of the arches on Edinburgh’s East Market Street where they emplo three people.

Testament to what they’ve so far achieved is the fact that the Young Entrepreneur of the Year gong (sponsored by Buzzworks and Flow) is on display in the bar, bagged at last year’s Scottish Bar and Pub awards. Business mentorship from Buzzworks’ Colin Blair and David Wither of Montpeliers was part of the prize and is now in full swing.

Said Linden, “They’re both so down to earth, added to which they have gone through what we are going through plus, and according to them, we will ‘learn by their mistakes’.” Rachael added, “They’re both generous with their advice and help because it’s easy for us to get too carried away with the ideas and creativity side and this can be to the detriment of the ‘business’ side.”

Continued Rachael, who is originally from Norwich, “That’s because we pride ourselves on our attention to detail and in the past we haven’t always been able to go to town with the interior decoration, say, but the creativity and thought we put into the menu more than makes up for this. That’s what the feedback we get tells us, like when we did the Survive Bar pop-up (Walking Dead) at six°north in Edinburgh and our ‘Lessons in Survival’ range inspired by the way that they survive in the show, and for which we used forageable ingredients.”

Yorkshire-born Linden added, “We also did an 80s’ themed Stranger Things pop-up with ‘upside-down’ counterparts to 80s classics. For example, the Pina Colada, which is long and colourful of course, was given our full upside-down treatment to become short, dark and boozy, i.e. a Coconut Rum Old Fashioned with fresh pineapple purée.”

The day I popped by to see them, to find out when they first went pop-up potty, the theme was Fairy Tales in a bar with a backdrop of ever-changing themes, altering every three months, there or thereabouts. Once we got chatting it soon transpired that the entrepreneurial bug first bit shortly after they met in Norwich in 2015 when Linden was working at Adnams (they met in the pub next door where Rachael was working). It was shortly afterwards that they upped sticks and moved to London, where Linden worked at Covent Garden’s Whisky Exchange and Rachael had a brief stint as an estate agent, feeling like a fish out of water.

Said Linden, “Our Game of Thrones’ obsession absolutely spurned my first attack of entrepreneurial inspiration, when I was walking across London’s Waterloo Bridge actually. I immediately called Rachael and told her that I thought we should be doing GoT wine tastings.”

Rachael added, “What eventually transpired was a wine tasting based on the wines of the seven kingdoms from Game of Thrones, which was helped both by the fact that Linden has a WSET (Wine & Spirit Education Trust London) qualification and that their flavour, taste and provenance, like their profile and climate, is all so minutely detailed in the books that it helped us find the closest ‘real world’ alternatives. GoT will always be our baby as this was our first and we both love ‘world building.’

Summer 2016 is when they properly breathed life into this idea, wangling the majestic Norwich Cathedral, no less, as their first pop-up venue. “We sold 60 tickets and there was still a demand for more, so we added a further 20. Luckily we had friends that could do mediaeval fencing (as you do!), and we put these guys in the quadrangle and this went down well. Plus one of them also played the piano and so was able to play the Game of Thrones theme tune as they all arrived. It just all seemed to fall into place,” Linden
explained.

One month later they did a Harry Potter-themed ‘Perilous Potions’ pop-up in the cathedral, which they decorated with candles, and that came with parchment scroll instructions on how to make the cocktails. Said Rachael,
“We researched the spells and came up with our own because the actual onesfrom Harry Potter are so tightly licensed. JK Rowling used he knowledge of French and Latin to come up with the names and so did we.”

She continued, “We did minimal marketing, like a handful of posters around Norwich and social media posts, because we were skint. It wasn’t cheap to be in the cathedral either, let me tell you, yet these two events kick-started the business by giving us the confidence and sharpening our business acumen because we also made a profit.”

Then came the call that altered the course of their lives, bringing them to Scotland for one. Explained Rachael, “In October 2016, my sister and her husband asked us to come to Edinburgh to help them out with their business, The Edinburgh Bow Tie Company on Rose Street, and it was during this time that we decided to repeat the Harry Potter tasting, for which we chose Greyfriars Kirk, the perfect setting, with all the names in the graveyard, and school with four houses behind it. This wasn’t as successful the second time around because we obviously didn’t have as good connections in the city, and was a good learning curve as such.”

It was at this point that, according to Linden, they started thinking along the lines of something more permanent, “We have always said that static themed bars only ever have a short run because themes and trends always, by their very nature, die. There are some static themed bars in London where the themes are loosely held together and that just dilutes the whole thing, with absolutely no focus at all, and we don’t want to go down that route. Similarly, we swore off ever going down the naming a drink after a character route because, frankly, it’s lazy.”

It was then that they were on the cusp of opening their own place. Said Linden, “It’s all very well and good doing events but we wanted something more permanent, so we toured bars in the city with disused areas with the intention to take them over and that search turned up the basement bar space in the now-closed Daylight Robbery on Edinburgh’s Dublin Street.”

He continued, “It wasn’t particularly busy midweek so we took it over then and did a profit share and we were very much ‘feeling’ our way. We opened on 4 January 2017 and we were full for a couple of weeks before Buzz Feed got hold of the story and the next week we had a queue of 300 people outside – and that’s why we’re here today doing what we’re doing.”

They began leasing the arch at East Market Street in February 2017 and now do a threemonth theme rotation. Recent themes have been ‘Fallout’ and the current one, ‘Fairy Tales.’

The next theme will be ‘Blood and Wine’, marking a return to GoT. Linden tells me that he’s very work-oriented the job and so finds it tricky switching off, while Rachael was quick to assure me that, because she has worked extensively in bars in her home town of Norwich, she ’s developed the knack of being able to switch off.

They also appear to complement one another as far as the day-to-day running of the business goes. Said Linden, “I’m more the design side, drawing the details out of the source material. Rachael is better at front-of-house and bringing our ideas to life.”

They aren’t ruling out upsizing to bigger premises in the near future, despite the wider cost ramifications of this. Explained Rachael, “A
smaller space is a lot easier and cheaper to redecorate and theme, but we do recognise the fact that we are restricted by space here. We have a few ideas that we’re mulling over and not yet 100 per cent set on. We may, for example, pop-up Perilous Potions, in
another Edinburgh venue while continuing to run this place. Another option is opening a whole new place and combining all the themes we’ve done to date by table.”

Away from the job Linden is a big gamer and Rachael describes herself as a foodie. They’re also off to Prague and Portugal soon, but their dream trip would be to drive down the West Coast from San Francisco to San Diego.

All staff contribute to creative ideas in what Linden calls ‘concept meetings’ and so I’m sure the business would be in safe hands were they to realise this dream anytime soon. Plus going on their pace of growth and appetite for more success, they may be hard-pressed to squeeze in a big holiday in the not too distant future.